Home » Entertainment » Omah Lay Parts Ways With Girlfriend, Gloria After She Was Accused Of Cheating On Him

Omah Lay Parts Ways With Girlfriend, Gloria After She Was Accused Of Cheating On Him. Nigerian singer, Omah Lay’s breakup with his bae, Gloria, has continued to make headlines on social media after the man she allegedly cheated with broke his silence. 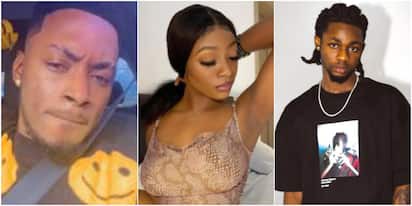 Reports made the rounds that Omah Lay and Gloria parted ways after a video went viral of the young lady spending time with another man. It was claimed that she was unfaithful to the singer.

However the young man that she was caught cheating with, Ramson Chima, has now shared his side of the story.

In a note posted on his Instagram story, the young man explained that Gloria has been his very good friend for six years now.

Explaining further, he said people close to them were well aware of their friendship including her boyfriend.

He has shut down all claims that Gloria cheated on the singer and has warned people to let her be.

Soon after Chima shared his post online, a lot of social media users made their opinion on the current issue.

The only thing we should take note of is that Gloria and Omah Lay are no longer dating.