In a conversation with Emmanuel during their dinner date in the executive lounge, Liquorose told Emmanuel that she can actually stay for 4 months without sleeping with a man.

Emmanuel couldn’t help but wonder why it was yesterday, after spending time with him for 7 weeks, and Liquorose stated that she doesn’t know why either. This was when Liquorose told Emmanuel that she’s not the type that gets intimate very often. Liquorose told Emmanuel that she can be with him, and they’ll not sleep with each other for 4 months. But when they eventually get to do it, he will never want to sleep with another girl in his life and he’ll wait because it’ll be worth it; Liquorose explained that he may cheat with his hands, but he’ll never want to sleep with another girl, unless she (Liquorose) did not put her mind into it.

As both housemates discussed further, Liquorose jokingly teased Emmanuel, as she stated that he is an all nighter, and Emmanuel affirmed it. 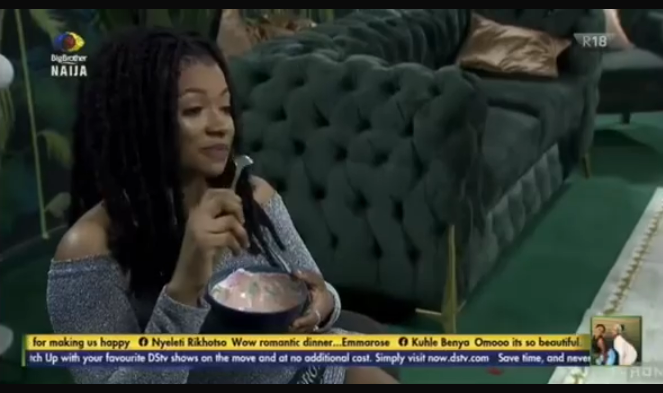